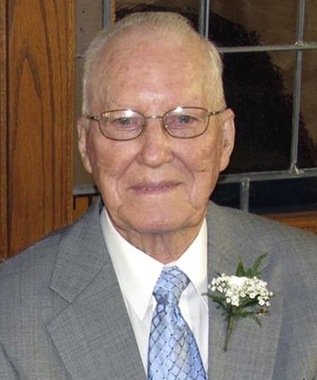 Back to W.'s story

W. Lynn Covert, 92, of Grove City, passed away on Sunday morning (Dec. 22, 2019) at home.
Lynn was born on Nov. 24, 1927, in Grove City, to Ross E. and Mary E. (Kay) Covert.
He first married Ruth Ellen Loper on July 3, 1948; she preceded him in death on June 13, 1973.
Lynn later married Edna J. Dunwoody on Sept. 26, 1975; she survives at home.
Lynn was drafted into the Army in 1951 during the Korean War and served a year in Alaska. Following his discharge in 1954, he served six years in the Army Reserves Medical Corps.
He joined the East Main Presbyterian Church in 1948 and was an active member where he served the church as an usher, deacon, elder and trustee.
At a young age, Lynn began working at Shillito Dry-cleaning and later joined the Lewis Dry Cleaners for many years until 1975. At that time he took a sales position with Calcium Chloride Sales of Grove City. In the early '80s he became a salesman at Jerry Taylor Ford and later retired.
He served on the Supervisory Committee for the Grove City Federal Credit Union for 16 years.
Lynn was an avid golfer and he enjoyed watching baseball, football and golf on television. He loved spending time with his family.
Lynn is survived by: his wife, Edna, at home; two daughters, Patricia Bonig and husband, Reid, Columbia, S.C. and Pamela Menacher, Seneca; a stepdaughter, Judy Buchanan and husband, Shawn, Mercer; five grandchildren, Ryan and Patrick Bonig, and Shane, Justin and Courtney Buchanan; and three great-grandchildren; a sister, Florence "Sis" Birckbichler and husband, Dale, Butler; two brothers, Orrin Covert, Grove City, and Leroy "Lee" Covert and wife, Linda, Volant.
In addition to his parents and first wife, he was preceded in death by: four sisters, Edna Ruley, Dorothie Barger, Helen Dennison and infant Betty Covert; a brother, David Covert; and a son-in-law, Richard "Bud" Menacher.
Memorial tributes can be made in Lynn's memory to the East Main Presbyterian Church.

Plant a tree in memory
of W.

A place to share condolences and memories.
The guestbook expires on March 22, 2020.

Mont and Stevie Mattocks
Our thoughts and prayers are with you during this time of sorrow.
Marilyn
So sorry to hear about your hubby. Deepest sympathy. Hugs
Howard and Diane Erdley
Edna so sorry to hear is Lynn's passing. We shared a lot of good time a together. You are in our prayers.
View all