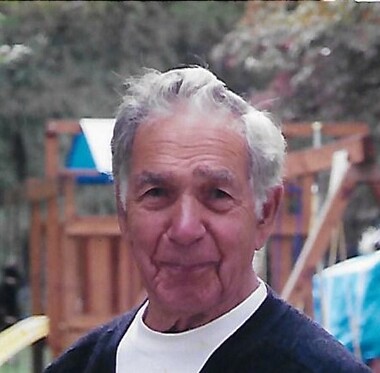 Back to Raymond's story

Raymond Stephen Bartolo, 96, of Greenville, passed away Wednesday evening, Sept. 4, 2019.
He was born on May 19, 1923, in Grove City, to Michele and Lucia (Zappavignia) Bartolo, immigrants from Calabria, Italy. Ray grew up in Grove City, and attended and graduated from Grove City High School.
He enlisted in the U.S. Army on Feb. 23, 1943, along with his brother Ed. Ray was deployed to La Havre, France, to join forces in World War II and fight in the European Theater in the Battle of the Bulge. A sharpshooter, he served in active duty with the Headquarters Battery of the 365th Field Artillery Battalion of the 97th Infantry Division in France, Dusseldorf, Belgium and along the German-Czechoslovakian border.
As a T/5 corporal, he was in charge of a wire crew that laid wire behind enemy lines to set up communications to relay coordinates back to the mortar team. In turn, they fired upon German forces to push them back so the infantry could advance.
On April 23, 1945, upon returning from a wire mission, he and his crew came upon a facility unknown to them at the time, the Flossenbürg concentration camp. The German soldiers were fleeing it due to the American forces' advance.
Ray and his crew, along with another division, broke into the camp to discover the prisoners and conditions that would never be erased from his mind. They liberated and freed the prisoners that day with the help of a doctor from Poland, who who took them through the camp.
At a later date, Ray marched past the cemetery where, unknown to him at the time, his brother Ed had been buried; this after having suffered wounds on Christmas Day in the Battle of the Bulge, and eventually dying on New Year's Day.
In May of 1945, Ray was sent back to the U.S. He landed in New York, then San Francisco and eventually Seattle, Wash., to be deployed to the Pacific Theater to fight in Japan. This invasion mission was diverted to the Philippines due to the bombing of Hiroshima and Nagasaki while in route to Japan.
He eventually landed in Japan in September of 1945, where he was placed on a special mission to capture war criminals known to be hiding there. After several successful captures, one day upon setting up tents, he was stung by a scorpion, and later after recovering, Ray was sent home on Dec. 25, 1945, and returned to his family. He was awarded medals for sharpshooter, the American Campaign, European Campaign, Pacific Campaign, World War II Victory Medal and Medal for Good Conduct.
Ray attended trade school and after graduating, he became employed at the Chicago Bridge and Iron Co. in Greenville as a draftsman, where he worked his entire career until the plant closed in 1983.
While employed there, he met Mary Detelich who worked in the offices. They later were married on June 19, 1954, at St. Michael's Church in Greenville.
Together they proudly raised two children, Cynthia (1955) and Mark (1958) and remained in Greenville, where he dedicated his life to his family.
Over the years, he enjoyed playing for CB&I Fast Pitch Softball and bowling leagues. He loved hunting, golfing, gardening, watching sports of any kind, coaching Little League and along with his wife, playing cards with friends.
He served on the Board of Directors of the Greenville Area Leisure Services Association for 20 years and dedicated his time to the Greenville Memorial Swimming Pool for the local community.
He served as president of the Reynolds Wrestling Boosters Club and was an avid fan of Reynolds Wrestling. He served many years as chairman of the board for the Mercer County Housing Authority. He served as chaplin for the Italian American War Veteran's and was a life member of the Greenville Italian Home Club and the Greenville VFW. He served as a lecter and usher for over 40 years at Saint Michael's Church in Greenville.
He enjoyed traveling with his wife to visit his children, grandchildren and great-grandchildren, his most cherished accomplishments.
Although quiet about his war experiences after returning from the Army, in 1995, 50 years after the Flossenbürg liberation, he answered an article in the VFW magazine seeking liberators of the camp for testimony of the events that occurred. He was later interviewed by the Spielberg Shoah Foundation, which was documenting testimonies of the Holocaust.
Later and reluctantly at first, he began to accept invitations to speak about his experiences at local schools because he felt it was important for today's youth to understand what occurred in history and to learn how fortunate they are to be Americans. He also spoke at many public events, including the Pittsburgh Holocaust Center.
He is survived by a daughter, Cynthia Conte, of Richmond, Va. and husband Joseph; son, Mark, of Greenville; seven grandchildren, Michael Conte, Matthew Conte, Samantha Payne, Nicholas Conte, Michael Bartolo, Mikala Bartolo and Anthony "Rocco" Bartolo; and five great-grandchildren.
He was preceded in death by his father Michele, 81, and mother Lucia, 92; brother Orlando, 5; brother Ed, 20; two sisters, Mae, 87, and Yvonne, 85; and his wife Mary, 75.
He was a kindly gentleman, loving father and great American. He was the kind of man God would want every man to be.
Memorial contributions may be made to St. Michael Roman Catholic Church, 85 N. High St., Greenville, 16125 or to Greenville V.F.W. Post 3374, 54 Conneaut Lake Road, Greenville, 16125.

Plant a tree in memory
of Raymond

A place to share condolences and memories.
The guestbook expires on December 04, 2019.

Restore the guestbook to view the 7 more posts by family and friends, and share a memory or message of condolence of your own.