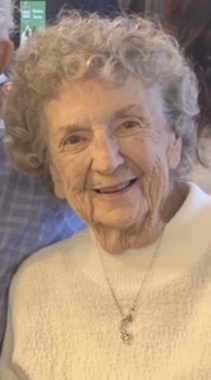 Back to Pauline's story

Pauline J. "Polly" Glenn, 89, a lifelong resident of Grove City, went home to be with the Lord on Friday (Dec. 27, 2019).
Polly was born on Jan. 18, 1930, in Grove City, to Frank M. and Alice M. (Ramsey) Gray.
She married Charles E. "Chuck" Glenn on March 25, 1948; he preceded her in death on Nov. 15, 1997.
Polly was a 1947 Grove City High School graduate. She received a miniature race car for being the fastest typist in her class. Polly worked at First National Bank for the first two years of their marriage.
Polly and Chuck were charter members of the Parents' Association for Exceptional Children, starting a lab school at Slippery Rock State College in 1966. She was actively involved in Grove City Women's Club, Eastern Star, and P.T.A. and served as a Girl Scout leader.
Polly was a lifelong member of Center Presbyterian Church, where she served as church organist for many years. She played the piano for the children and was the church historian.
She kept a diary since Jan. 1, 1955, without missing a day. Polly enjoyed photography, as well as keeping in touch with family and friends through Facebook.
After Chuck's retirement, Polly, Chuck and Laurie Sue spent winters as "Snowbirds" in West Palm Beach and attended the First United Methodist Church of Boynton Beach.
Survivors include: four daughters, Kathy Cooper and husband, Les, Wasco, Calif., Sandy Boosel and husband, Nelson, New Wilmington, Debbie Loyal and husband, Donny, Lantana, Fla.; and Sherrie Critchlow and husband, Mark, Loxahatchee, Fla.; seven grandchildren; eight great-grandchildren; and a brother, Joseph Gray and wife, Shirley, Grove City.
Pam, Ruby, and Linda Hamilton were part of the Glenn family during their teenage years.
Polly was preceded in death by: her parents; husband; a daughter, Laurie Sue; and an infant sister, Marguerite.
She spent her life loving God, her family and friends unconditionally. Memorial contributions can be made to Center Presbyterian Church.

Plant a tree in memory
of Pauline

Craig Nuss
Polly was one of those rare people who was upbeat and smiled all the time. I always looked forward to talking with Polly (and a hug from Laurie Sue!) when they were back in Grove City. Laurie Sue, was a perfect reflection of Polly's kind and gentle spirit. May God give his great peace and be a presence to Polly's family at this mournful time.
Sue tomson
I'm so sorry to hear of your lose. Polly was one of my favorite people. I always enjoyed talking with her. Even though she always called me Deb. Lol I always made sure to send her a copy of the Center Fold from church and always published Laurie's letters for all to read. She will be missed.
View all