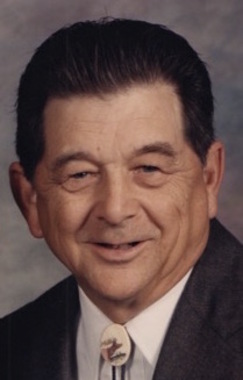 Paul P. "Toby" Tobias, Grove City, passed away Friday, (Dec. 13, 2019) in Grove City Medical Center surrounded by family and friends. He was 94.
He was the son of George and Anna Gumaca, immigrants from Czechoslovakia. Toby was born in Farrell Dec. 1, 1925.
Following his father's death in Altoona, Pa, he moved to a foster home in Grove City and later graduated from Grove City High School in 1945. After high school, brothers Chuck and Dean Glenn moved Toby in with their parents, Oliver and Lenora Glenn, where he was treated like family.
On May 23, 1953, he married Ethel (Kess) Decker.
Toby retired in 1989 as the owner of Paul's Sporting Villa and continued working many part-time jobs to keep himself busy. He worked as a security guard at the Grove City Hospital and later at Grove City College. Also, he kept busy mowing grass at the Slovak Store and Aunt Martha's Antique Store.
Toby enjoyed spending time with family and friends, visiting the sick and shut-ins, as well as delivering Meals on Wheels for many years.
He loved working in his garden, hunting, fishing and working on puzzles.
He was a member of Center Presbyterian Church, Grove City, from 1950 and he remained active until his death. He was an elder and a Sunday School teacher. He was also a member of the Volant Lions Club and the F. and A.M. Lodge 603, Grove City.
He is survived by: his wife, Ethel "Kess" at home; two sons, Dennis P. and wife Debra L., Mercer; and Rodney G. and wife Kim L., Grove City; two grandsons, Josh Tobias, Grove City, and Bryan P. Tobias and wife Alyssa D., Arvada, Colo.; and a great-grandson, Brooks Glenn Tobias.
He was preceded in death by: his parents; a granddaughter, Abby Tobias; two sisters, Marion Decker and Leona Vasconi; and five brothers, Emil, Andrew and Albert Tobias and Charles and Dean Glenn.
In lieu of flowers, memorial donations can be made to Center Presbyterian Church, 333 Center Church Road, Grove City, PA 16127.

Plant a tree in memory
of Paul

A place to share condolences and memories.
The guestbook expires on March 13, 2020.