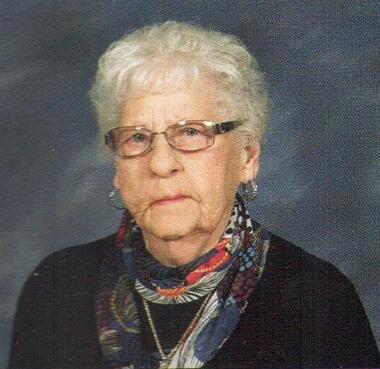 Back to Nellie's story

Nellie L. Kroell, 101, of Stoneboro, passed away on Jan. 26, 2020, at Quality Life Services - Grove City.
Nellie was born on Jan. 8, 1919, in Findley Township, to the late Solomon and Della (Haag) Stevenson. She married her beloved husband, Joseph L. Kroell, in July 1950. He preceded her in death.
Nellie was a homemaker to her family for most of her life. During World War II she worked at Bessemer in Grove City. Over her years she also cleaned for many families.
She was a member of the Women of the Moose and the Stoneboro Women's Club. She was a hardworking woman and enjoyed cooking, cleaning, doing yard work, and creating large bonfires.
Nellie was a member of St. Columbkille Roman Catholic Church, Stoneboro.
Nellie is survived by her daughter, Mary Frampton and husband Donald of Grove City; grandchildren, Michelle Ed and companion Michael of Johnstown; Todd Frampton and wife Debbie of Harrisville; great-grandchildren, Brittney Straite and husband Dan; Nelle Kearney and husband Jake; Wesley Ed and fiancée Maria; and Jake Frampton and wife Margaret; and great-great-grandchildren, Jacob Straite and Luka Kearney.
In addition to her husband and parents, Nellie was preceded in death by her five sisters and seven brothers.


KROELL
Nellie L., 101, of Stoneboro.
Mass of Christian burial: 11 a.m. Friday (1-31-20) at St. Columbkille Roman Catholic Church, 70 Franklin St., Stoneboro.
A Celebration of Life service will be announced at a later date.
Interment: Oak Hill Cemetery.
Funeral arrangements have been entrusted to BLACK FUNERAL HOMES of Stoneboro and Sandy Lake.
Online condolences may be sent to the family by visiting
www.BlackFuneralHomes.net.
Published on January 27, 2020
To send flowers to the family of Nellie L. Kroell, please visit Tribute Store.

Send flowers
in memory of Nellie

A place to share condolences and memories.
The guestbook expires on April 26, 2020.

Madine (Dunkle) Wygant
Prayers and love sent to the family!!
View all