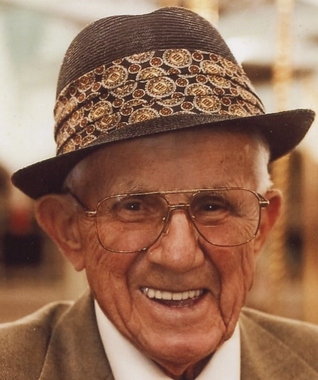 Michael Olshavsky, Hermitage, passed away peacefully on Dec. 8, 2019, at St. Paul's senior living community in Greenville. He was 100.
Mr. Olshavsky was born Sept. 24, 1919, to Peter and Mary (Petak) Olshavsky, the second of nine children.
Growing up on Reed Street in Sharon, he was a child during the Great Depression. As a teenager, he had multiple money-making ventures, including selling the pelts of small animals he trapped along the Shenango River.
To further assist his family, he joined the Civilian Conservation Corps in 1939. He spent a year working near the Natural Bridge in Virginia. Mike earned $25 a month, sending $20 home to his family and keeping the remaining five. Upon completing his CCC work, he landed a job sweeping floors at the Westinghouse Electric plant in Sharon.
His work at the plant was soon interrupted by World War II. In 1942, he enlisted in the Navy. Assigned to Blimp Squadron No. 23, he became an aviation machinist mate second class. He kept the blimp motors going as his squadron patrolled along the Gulf Coast, keeping watch for enemy boats and submarines.
After his honorable discharge, he returned to the Westinghouse plant, where he worked as a coil winder, winding some of the largest coils ever made at the plant.
In 1950, he married Helen Roman at St. Michael's Byzantine Catholic Church in Hermitage. A lifelong parish member, he put up booths and lighting for the annual church bazaar and even called out bingo numbers.
In addition to his work at the church, Mike built four homes with his four brothers. Mostly self-taught, they did it all from electrical wiring, plumbing, woodwork, plastering, to bricklaying.
Retiring from Westinghouse after 39 years of work, he kept busy farming several acres with his brothers, Andy and John. Mike's green thumb ensured plenty of produce to sell. He loved his Hungarian wax peppers, often eating them right off the vine. He also enjoyed spending time at the Farrell VFW Post 5286 and cheering on the Pittsburgh Steelers and Penn State.
His wife Helen died in 1991 after 40 years of marriage. He was very dedicated to her and cared for her at home for many years. Several years later, he met Kay Ruffner, who was his companion until she died in 2008. They enjoyed dancing and traveling to Florida as well as out west.
Turning 90 did not slow him down, as he enjoyed his granddaughter's wedding in New Orleans, showing off his dancing skills on Bourbon Street. His lifelong love of big band music and dancing began at the Yankee Lake Ballroom.
Mike was preceded in death by his four brothers Andrew, Peter, John, and Edward; and his four sisters Ann Koshan, Delores Beach, Helen Bottenfield, and Irene Brantingham. He was also preceded in death by seven cousins.
Mike is survived by two daughters, Michaelene (Mickey) and her husband Joseph Gula, Greenville; and Susan and her husband Glenn Hobaugh, Herndon, Va. Mike is also survived by four grandchildren, Emily Gula and her husband Elijah Sproles, Contoocook, N.H.; Benjamin Gula and his wife Michelle, Weymouth, Mass.; Jeremy Hobaugh and his wife Kimberly, and Amy Hobaugh, all of Herndon. In addition, Mike is survived by four great-grandchildren, Lily and Eli Sproles and Crosby and Rebecca Hobaugh.
When his grandchildren were toddlers, Grandpa Mike enjoyed teaching them to say, "Simply Amazing." The same could be same for himself - his zest for life was simply amazing.
In lieu of flowers, donations may be made to St. Paul's Senior Living Community, 339 E. Jamestown Road, Greenville PA 16125, St. Michael Byzantine Church, 2230 Highland Road, Hermitage PA 16148 or Buhl Park, 715 Hazen Road, Hermitage PA 16148.

Plant a tree in memory
of Michael

A place to share condolences and memories.
The guestbook expires on March 08, 2020.

Lisa Mitchell
I want to share my deepest condolences to your family ! Mike was a wonderful man who will be deeply missed ! Your family is in my thoughts and prayers during this difficult time 💔🙏
Julianne Roman Gilliland
So very sorry for your loss. Hope to talk to you soon, Mickey. Candy Gilliland.
View all