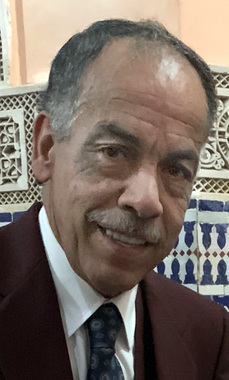 Back to Kamal's story

Kamal Guertit Houari, 66, of Grove City, passed away on Monday evening, Jan. 13, 2020.
Kamal was born on Nov. 12, 1953, in Fez, Morocco, to Tayeb Guertit and Fatma (Bezzari) Houari.
He moved to the U.S.A. in 1969. While Kamal did not know a word of English, he always spoke the language of kindness, which quickly found him at the center of a village of friends and family on both sides of the Atlantic. He married Linda Decker on April 1, 1978.
Kamal was a graduate of Slippery Rock University, where he received a BS in English.
He was an outstanding soccer player and an inductee into the Slippery Rock Hall of Fame, where he is the all-time leader in assists and achieved National All American recognition.
Kamal started the soccer program at Westminster College, where he also coached, and was also a FIFA referee for many years.
He worked for George Junior Republic in Grove City for over 25 years, where he counseled and lead many youth with compassion and heart.
He used his love of soccer to bring boys together to work to a common objective on the field, eventually developing and coaching a GJR Boys' varsity soccer team.
Post-retirement, Kamal also worked for The Herald, where he enjoyed watching the sunrise every morning.
Survivors include his wife, Linda at home; three children, Sean T. Houari and wife Sheila, Indian Land, S.C.; Sonya McIntyre and husband Chris, Fort Mitchell, Ky.; and Lelia Houari, Charleston, S.C.; two grandchildren, Mikayla and Kole McIntyre, Fort Mitchell, Ky.; brothers, Abdrahaman (Tereah) Houari, Morocco; Iyochi (Isha) Houari, Morocco; Driss (Chris) Houari, Columbus, Ohio; Ghali (Hakima) Houari, Morocco; Fuad (Leila) Houari, Morocco; Rachid (Loubna) Houari, Morocco; Saad (Drissya) Houari, Morocco; Hicham (Kadija) Houari, Morocco; sisters, Hakima Houari, Morocco; Harya Houari, Morocco; Bahija (Aziz) Khalis, Morocco; as well as many others, here and abroad.
He was preceded in death by his parents, Tayeb Guertit Houari and sisters Fatma Bezzari, Fatima Houari, and Rahama Bennani, all of Morocco.
In lieu of flowers, contributions can be made in Kamal's memory to Faithfully Restored, 7340 Autumn Crossing Way, Brentwood, TN 37027 or at www.faithfullyrestoredwomen.com/donate.

Plant a tree in memory
of Kamal

A place to share condolences and memories.
The guestbook expires on April 14, 2020.

Charles Lyster
Kamal what can I say that would be great for you, you taught me a lot about being a good soccer player and I remember you always yelling at me cause I would smoke at practice and I had to run laps, we had many good times and I will always remember you and Linda and Anthony and Rochelle were a big part of my teenage years I thank you and your family for being so patient with me and I will miss you greatly. Fly high my friend.
Vicki Werner
I'm sorry to hear about Kamal's passing. With Deepest Regrets and Sympathy. You and your family will be in my thoughts and prayers.
Jeff Stainbrook
You will be greatly missed on the soccer pitch, your smile & your humorous phrases will ever be in my heart. You have been a great mentor to me & many fellow referees. Although we have lost a great friend, referee & ambassador to the sport, your life lives on in those you have touched. Rest in peace my friend. For the good of the game.
Kerry Knapp
I'm so sorry to hear about Kamal's passing. I have such fond memories of working with him & his brother Driss at our part time job at Lincoln University and playing high school soccer with him (1971)...he was our star defensive player...he had to be we didn't have much offense.
Peggy Potalivo
Linda and family, I am so sorry for your loss. My thoughts and prayers are with you.
BobbiJo Blair
Linda , life is so short in the grand scheme of things. God has his plans for us even if it’s hard to accept. Prayers and thoughts for you and your family.
Margo Weber
Linda and family: I am so sorry for your loss. May joyful memories make this life transition less painful. May those memories make you laugh, make you cry and in doing so make you feel his presence. Praying you peace in this time of loss and grief.
Paula Gruber Renninger
My heart breaks for all of you Linda. I am praying and I care.
Judy Wagoner Delp

Kamal will be missed. I respected his friendship in high school and have thought if him often thru the years.

Robyn hughes
Keeping all of you in my thoughts and prayers.
Cyndi Burk
Do sorry for your loss!
View all