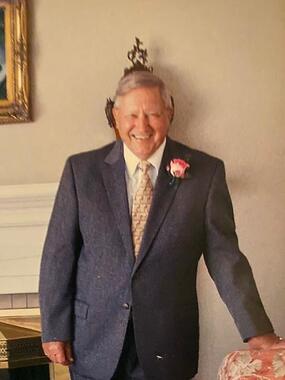 James A. Jovenall, 79, of Hermitage, passed away peacefully on Feb. 13, 2020, in UPMC Farrell hospital with family at his side.
James was born in Sharon Feb. 17, 1940, to Joseph and Nancy (DePofi) Jovenall. He graduated from Sharpsville High School class of 1958 as class president.
He married his high school sweetheart, Inez L. Gibson, who passed away in 2014. They were blessed with 54 years together and enjoyed spending winter months in their Florida home.
James and his wife Inez owned and operated the Jovenall Insurance Agency for 37 years. He was very active in the community, serving as councilman and then mayor of Clark borough, treasurer of the Clark Sewer Authority, Clark Fireman's Relief Association, and president of the Mercer County Boroughs Association.
Jim also served as an elected member of the Mercer County Government Study Commission. He was a founding member of the Mercer County Regional Council of Governments and served a term as president. In 1973 he was appointed by the Mercer County Commissioners to serve as the first director of the Senior Citizens Department, which later became the Agency on Aging.
Jim was also an unsuccessful candidate for the Pennsylvania Senate, losing to R. Budd Dwyer. Jim was an avid golfer and loved to travel.
He was a member of St. Bartholomew R.C. Church, Kedron Masonic Lodge 389, and a 32nd degree Mason of the Scottish Rite Consistory.
He loved the time he got to spend with his family and watching his grandchildren play sports, often saying that being a grandfather kept him young.
James is survived by his children, Laurie (Greg) Weigle, Stephen (Christine) Jovenall, Rebecca (Christian) Farmakis; beloved grandchildren, Joshua, Nicholas, and Aaron Marriotti, Jason Jovenall, Kaitlyn Malgeiri, Jackson and Esme Farmakis; one great-grandchild, Aria Malgeiri; his brothers, Frank (Darline), Joseph (Tammy), William; his friend Susie; and sister-in-law, Marsha.
He was preceded in death by his parents and brother, John Jovenall.

Send flowers
in memory of James

Sweetest Sunrise Bouquet was purchased for the family of James A. Jovenall.  Send flowers

Melissa Penniman Trodden
I am so sorry for your loss. Laurie and the family are in my prayers, Rest in Peace
View all