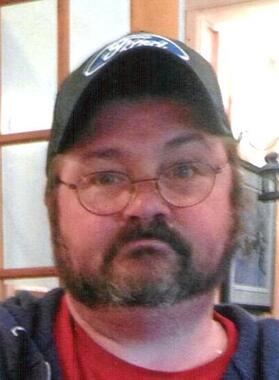 Back to Guy's story

Guy R. "Gig" Bobbitt, 53, of Jackson Center, passed away Friday (Dec. 13, 2019) at Avalon Springs, Mercer, after a battle with Glioblastoma brain cancer.
Gig was born in Grove City July 18, 1966, to Judy Merlin Stearns and Guy "Frenchy" Bobbitt.
He was a 1984 graduate of Lakeview High School and went on the work as a supervisor for Reznor until 2004 and in maintenance for ITV until he became ill in 2018.
Gig enjoyed the outdoors and hunting and fishing. He enjoyed classic and antique cars as well as music, reading, and history.
Gig would often use the "I Love You" hand sign to show those around him he was OK.
Gig married his beloved wife, Mary (Bradford) Bobbitt, on Sept. 13, 2008. She survives at home.
Besides his wife, Gig is survived by: his mother, Judy Bobbitt, Jackson Center; brother, Mike and wife Amy Bobbitt, Jackson Center; children, Matthew, Lexi, Abby, Jeremy, and Chris; eight grandchildren; nephews, Devin and Dylan Bobbitt, Jackson Center, Andrew Rose and Nathan Svirbely, Greenville; niece, Kassy Bucher and husband, Wade, Greenville; great-nephew, Evander Rose, New Castle; sister-in-law, Ronda Svirbely and husband Joe, Greenville; in-laws, Bob and Martha Bradford, Mercer; longtime friend and "bro," Steven Basham, Grove City; and his beloved cat, Syn, "The Baby."
Gig was preceded in death by: his father, Guy "Frenchy" Bobbitt; maternal grandparents, Paul and Martina Reed; paternal grandparents, Gilbert and Suzanne Bobbitt; and an infant brother, Steven Bobbitt.
The family would like to thank everyone who helped in keeping Gig comfortable during his fight with cancer. "Be Strong Like Bull Gigger!"
Memorials may be made in Gig's name to the American Cancer Society, Glioblastoma Research and Cure.

Plant a tree in memory
of Guy

A place to share condolences and memories.
The guestbook expires on March 13, 2020.

Jay Hoffman
My condolences to the family.
Carl Slaughenhoupt Jr.
I'm sorry for your lose . He will be greatly missed to all that knew Him.
Robert P Malaniak
I' ll never forget the laughter and good times, crazy antics, outrageous lunch hours, and caricature's of
fellow workers we shared for years. He was a good soul
that enhanced the workplace with his great spirit! RIP Gigger...Your essence will live on.
Matthew Clark Watson & Wilda Watson
So sorry to hear of your loss. I believe my mother, Hester Bobbitt Watson Mauk was your Grandfathers sister. She would be a sister-in-law to Suzanne. Our condolences to the family.
Connie Rihel
Mary so sorry for your loss. I know how hard it is saying goodbye to a spouse. My thoughts and prayers are with you and your family.
View all