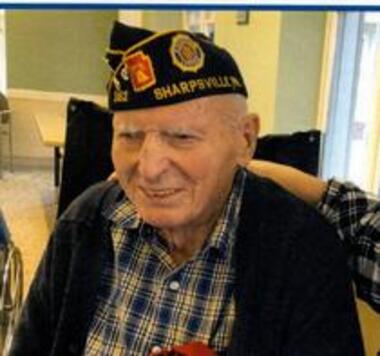 Back to Donald's story

Donald Bruce Eichelberger, 96, of Sharpsville, died on Monday (Jan. 27, 2020).
He was the beloved husband of Winifred Joyce Eichelberger. He was the youngest son of Johann Adam and Nona M. Eichelberger.
Donald was born Aug. 23, 1923, in Sunnyside, Hopewell Township, Bedford County.
Donald was a proud World War II veteran of the Pacific Campaign and a long standing member of several veterans organizations.
He was at his death the oldest member of the First United Methodist Church, where he had served in many leadership positions.
He graduated from Robert Smith High School in Yellow Creek. He also graduated from Bliss Electrical School in Takoma Park, Md. He retired from Westinghouse in Sharon.
He was a long-time participant in the Sharpsville Service Club, the Shenango Valley Christian Associates, American Legion, VFW and Honor Guard of West Middlesex.
Among his many interests were gardening and traveling. Donald traveled to the Philippines and Okinawa, where he had been in the military. Mission trips were to Haiti and the Democratic Republic of the Congo.
He is survived by: his wife of 72 years, Winifred; three sisters-in-law, Elizabeth S. Dittmar, Catherine R. Dittmar and Barbara S. Dittmar; his four children, David and Sandra (Thomas) Moffitt of Pittsburgh, Emily (Jeffrey) Garrett of West Middlesex, and Susan Hake of Sharpsville; and many family friends, including the Stottlemyer children, Jenkin children and Howard Cherry; eight grandchildren; and seven great-grandchildren.
The family would like to send a special thanks to the Spring Unit at St. Paul's Senior Living Community for their compassionate care.
Memorial contributions may be made to Sharpsville United Methodist Church, the Buhl Foundation or a veterans organization of the donor's choice.

EICHELBERGER
Donald Bruce, 96, of Sharpsville.
Memorial services will be held by the family graveside in Bedford County at a later date.
Online condolences may be expressed at www.donaldsonmohney.com.
Arrangements by DONALDSON-MOHNEY FUNERAL HOME AND CREMATION SERVICE, 124 W. Main St., Sharpsville.
Published on January 28, 2020
To send flowers to the family of Donald Bruce Eichelberger, please visit Tribute Store.

Send flowers
in memory of Donald

A place to share condolences and memories.
The guestbook expires on April 27, 2020.

Sherma Ferguson Kain
So sorry for your loss. Praying for peace and strength for your family.
Sally Patterson
I am so sorry to hear of Don’s passing. I have known the Eichelberger family since I was a little girl at Sharpsville United Methodist Church . They were just the nicest people ever! And it’s great to keep up with Wini on Facebook!!
REST WITH GOD DON.
View all