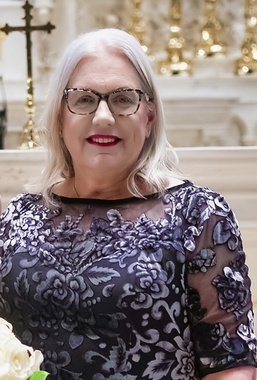 Back to Deborah's story

Deborah "Debbie" Ajak Mogle, 66, of Hermitage, passed away unexpectedly on Wednesday, Feb. 12, 2020, due to complications from the flu despite her strong fight and otherwise great health.
Her husband, David Mogle, and son, David Mogle II, were by her side at Advent Health Celebration Hospital in Orlando, Fla., when she passed.
Born on Nov. 17, 1953, in Natrona Heights, she was the daughter of the late Paul R. Ajak and Anne M. (Egelsky) Ajak. Debbie was a graduate of Deer Lakes High School, Class of 1971.
She earned a bachelor of arts degree from Thiel College a semester early in January 1975. Debbie was an active student on campus, majoring in psychology and elementary education and serving as president of Zeta Tau Alpha women's fraternity.
She enjoyed teaching fourth grade at the former Sacred Heart School in Sharon for a number of years. She and her husband, her Thiel College sweetheart and successful banker, owned and operated Lynn's Hallmark Shop Washington Center in New Castle and Lynn's Hallmark Towne Mall in New Castle for 13 years until they were sold.
Her pride and joy was her son, David II. Debbie loved being a mom and homemaker. She loved watching her son grow up and enjoyed watching him play baseball, basketball, soccer, and ice hockey. She was his biggest fan!
One of her proudest moments was seeing her son graduate from West Virginia Wesleyan College. Debbie was an excellent cook and baker, hosting many gatherings for family and friends.
She was a devout Catholic and member of St. Joseph Catholic Church in Sharon. Debbie supported her church, many Catholic charities including the Prince of Peace Center, Thiel College, and several other charities. She served on the Thiel College Alumni Association Board of Directors and Citizens Advisory Board.
She enjoyed traveling to Europe frequently with the Adventures By Disney travel company. Prague and St. Petersburg were two of her favorite places she visited.
Debbie reached platinum cruiser status with Disney Cruise Line and also loved traveling to Walt Disney World. She and her husband especially liked the Epcot Festival of the Arts.
They also took trips together to New England to visit their son and to the Finger Lakes, N.Y. She was a member of the Western PA Slovak Cultural Association and CHADD.
Survivors include her husband of 45 years, David B. Mogle; her son, David Bruce Mogle II of Malvern; sister, Polly Ajak (Jack) Rosenberger of Natrona Heights; brother, Paul R. (Barbara) Ajak II of Aspinwall; uncle, Harold Egelsky of Lower Burrell; niece and goddaughter, Elizabeth Anne Rosenberger (Tim) Giel of Port Imperial, N.J.; nephew, Paul Ajak III; nieces, Lauren Ajak and Megan Rosenberger; cousins; and many dear friends.
Memorial donations may be made in her name to American Heart Association, 444 Liberty Ave. No. 1300, Pittsburgh, PA 15222.

Send flowers
in memory of Deborah

The Zippie Family
We are so saddened to hear of Debbie’s death. We can only imagine the grief that you are going through. Our thoughts and prayers are with you.
Allison, Hope, Michael & JP from Disneys Beach Club Resort

Bruce Bischoff ( Phi Theta Phi )
Dave, My sincere condolences on the loss of your wife. I do know, however, that
you and your son will someday be with
her again! Hopefully, that will give you some comfort. My prayers are with you and your family during this difficult
time.
Bruce
Bruce Bischoff
Love Rick, Beth, Kierra,Cameron, Connor & Kaitlyn Kruisselbrink, Gaye and Jim Rushen family

Frank Newnam
My deepest sympathies Dave to you and your family. I can't imagine the pain you are feeling. My prayers are with you all!
Very sincerely,
Frank Newnam
Rich and Nancy Yonchak
Our deepest sympathies to Dave and your family. very sorry to hear this sad news. She was always so sweet and friendly
Suzanne Mariani
Dear Dave and David, we are shocked and deeply saddened to learn of Debbie's passing. Our hearts are grieving for your loss, and we send our prayers for God's everlasting arms to comfort you and your family during this difficult time. Lovingly, Ray and Suzanne
Tim Quinn
Dave and family we are sorry to learn of your loss and send our deepest sympathies. As fellow Catholics, we will offer a prayer at mass this week for Deborah and for you and family.

Tim Quinn
Donna Young and Karen Pitts
Many Sundays my sister and I would see Debbie at 8:30 mass at St. Joseph Church in Sharon and afterwards at Panera. Although we didn’t talk much to each other her presence was always recognized. Your family is in our thoughts and prayers. Take care.
View all