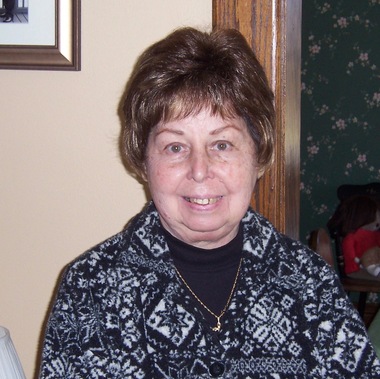 Back to Cynthia's story

Cynthia Lee (Lytle) "Cyndy" Ciochetto, 76, of Forestville, passed away on Wednesday (Jan. 22, 2020) at home after a six and a half year battle with ovarian cancer.
She was born Sept. 9, 1943, in New Castle, a daughter of Kenneth Ray Lytle and Wilma Marlia Keeling Lytle. She attended New Castle High School and graduated in 1961.
Early jobs she held were a cashier at Penn Theatre, a secretary at St. Paul's Lutheran Church, and an office person at Bolotin's Furniture Store.
After raising her children, she worked at Slippery Rock University in the North Hall dining room, and later as a data transcriber/trainer for OPM/FIPC, which later became USIS when they were privatized. She also worked several years at the Mercer Township Election House.
She married David L. Ciochetto on Friday, Oct. 13, 1967, in New Castle; he survives. They lived in Grove City, before settling in Forestville.
She was a member of St. Anthony Roman Catholic Church of Forestville, where she was a former CCD teacher/coordinator and a member of Christian Mothers, serving as both president and treasurer during her membership. Currently she was a member of the Sewing Ministry.
Cyndy and her husband Dave enjoyed traveling to Las Vegas, Hawaii, and Cancun, Mexico; cruising the Caribbean; and wintering in North Fort Myers, Fla. She also completed her bucket list trip to Alaska on a cruise and interior tour with her family in 2015 during one of her remissions.
Her hobbies included gardening, biking, walking, playing cards and board games, sewing, knitting, cross stitch and selling on eBay.
Survivors include: her husband, David L. Ciochetto of Forestville; her daughter, Nikki L. Ciochetto of Forestville; her son, David S. Ciochetto and his wife, Audrey B. Barnett Ciochetto; her grandson, Nico L. Ciochetto, all of Wakefield, R.I.; her brother, Kenneth T. Lytle (Lynn) of New Castle; two nieces; one nephew and their families; brother-in-law, Donald T.H. Brinker; two nephews and their families; sister-in-law Barbara (Ciochetto) Kristufek; and one nephew and his family.
Preceding her in death were: her father and mother; sister, Marlia L. Brinker; grandparents, Grover and Myrtle Lytle, and Thomas and Minnie Keeling; father and mother-in-law, Louis A. and Ethel E. Bondariva Ciochetto; and brother-in-law LeRoy Ciochetto.
In lieu of flowers, Cyndy requests donations be made to either: ovarian cancer research at Magee-Womens Research Institute and Foundation through http://mageewomens.org or send to 3339 Ward St., Pittsburgh, PA 15213; or Grove City Area Pet Rescue, Box 292 Grove City, PA 16127; or your local animal shelter or rescue.

Send flowers
in memory of Cynthia

A place to share condolences and memories.
The guestbook expires on April 22, 2020.

Jim and Lorraine Book
Ken and Lynne you have our sympathy. Though we did not know her, we know you must be heartbroken. God be close to you and comfort you at this time.
Judi Kort

My condolences to the Ciochetto family. Nikki, I am sorry for the loss of your mother. Prayers for peace for the family

Fiery Lily and Rose was purchased for the family of Cynthia Lee Ciochetto by Jennie and Scott Grover.  Send flowers