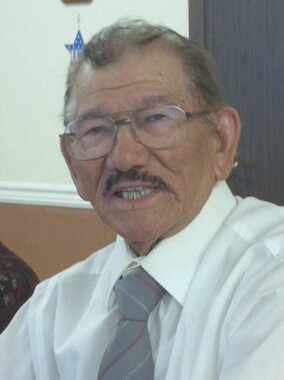 Back to Charlie's story

Charlie P. Scarbrough, Farrell, was born April 7, 1921, to the proud parents of Charlie and Fannie Mae Scarbrough in Columbus, Ga. Charlie was 98 years old when he passed away peacefully and slipped the bonds of this earth to go rest in the bosom of his Lord and savior.
Charlie, also known to many as C.P., was the fifth child of Fannie Mae Scarbrough and Charlie P. Miller. He was preceded in death by his mother, father, six siblings, and his wife, Annie Margaret Grear Scarbrough.
Charlie attended Radcliff High School in Columbus. After high school, he joined the Army and was stationed at Fort Benning, Ga. He was a private first class in the Army. He served during World War II and was honorably discharged and decorated with the WWII victory medal.
Charlie frequently shared stories of his time in the Army when he traveled to the Philippines, France, Germany and England.
In 1946, Charlie married the love of his life, Annie Margaret Grear Scarbrough. They were married for 48 years and their union produced three children, Connie, Ronnie and Cheryl. After moving from Georgia to the Shenango Valley in 1951, Charlie studied masonry at Penn-Ohio Tech earning his Certificate of Masonry. He used his masonry skills as a blast furnace ladle liner at Sharon Steel in Farrell.
Charlie retired from Sharon Steel after 36 years of service in 1986. Charlie also had an entrepreneurial spirit. He did masonry and carpentry work for various organizations and individuals throughout the Shenango Valley. Additionally, Charlie and Ann purchased homes in the Farrell area, refurbished them and rented them to individuals in need of economical housing.
Charlie was an active and vibrant member of his local community. As a young man, Charlie played baseball for the Farrell Grays. He also coached the Farrell Babe Ruth varsity league team teaching young men the techniques of baseball.
Charlie was an avid fisherman and hunter and started a fishing and hunting club where he shared his love of nature and the outdoors with friends. He also loved gardening. For many years, friends and neighbors enjoyed the fruits of Charlie's labor with harvest from his garden. His crown jewel was his Big Boy tomatoes, which were well-known among his family and neighbors.
Charlie was a God-fearing man and loved his Lord and savior Jesus Christ. He is survived by his two daughters and one son, Connie Scarbrough Robinson, Bloomington, Ind.; Cheryl Scarbrough Cosey, Atlanta, Ga.; and Ronald Charles Scarbrough, Farrell. Also surviving is his brother-in-law, Preston Grear, Farrell. Charlie leaves additional survivors including his grandchildren, great-grandchildren, a host of nieces, nephews, in-laws and devoted friends.
We would like to thank our dad's earthly angel, Ronnie Scarbrough, who took great care of our "Pop" on a daily basis. We also thank those who called, prayed and visited during dad's latter years as he became infirmed as well as the doctors and nurses at UPMC who cared for him.

Plant a tree in memory
of Charlie

A place to share condolences and memories.
The guestbook expires on March 08, 2020.

Holly Chiodo
Cheryl, you and your family have my deepest sympathy. I'm so sorry. I've enjoyed your fb posts of you and your dad; and, could see the love you had for him, and he you. Our fathers were wonderful people. Keep the memories tight inside - I think of my dad's bright eyes and smile when I'm down, and warmness comes over me, instantly. Thinking of you and wishing you peace. Your friend, Holly
View all