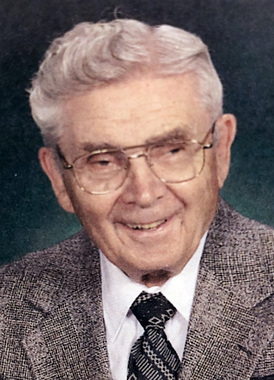 Back to Andrew's story

Andrew Chuba, 97, of the Ridgewood Shenango Valley, passed away on Tuesday, Jan. 14, 2020, at home.
Born on Nov. 27, 1922, in Sharpsville, Andy was the son of the late George and Susan Semancik Chuba.
He graduated from Sharpsville High School in 1940. Andy was an veteran of the U.S. Army serving in the Pacific Theater during World War II where he achieved the rank of Master Sergeant.
Andy was retired from GATX where he had a long career and retired as a computer programmer.
He was a member of St John's Orthodox Church.
Andy enjoyed sports. He was a fan of Penn State football and the Cleveland Indians and Browns. He played softball and golf, and continued bowling into his 90s.
Andy was pre-deceased by his wife of 68 years, the former Anne Flyak. He was a devoted husband and father.
Andy is survived by, his son, William Chuba of Downingtown; his daughter, Carol Walker and husband Scott of New Cumberland; his brother, Stephen and wife Joan of Sharpsville; his sister, Helen Kachaylo of Brookfield; his granddaughters, Jean Chuba of Wayne, Sharon Garthwaite and husband Brian of Lewisburg, and Cathy Falci and husband Peter of East Petersburg; four great-grandchildren; and numerous nieces and nephews.
In addition to his parents, and his wife, Andy was preceded in death by his sisters, Anna and Mary Chuba and Sue Lysohir; his brothers Michael, John, George and Thomas Chuba; and his daughter-in-law Frances Chuba.
Andy's family would like to thank the staff at the Ridgewood, Kindred Hospice, and his Visiting Angels for their compassionate care.
Memorial contributions can be made in Andrew's name to St John's Orthodox Church, 3180 Morefield Road, Hermitage, PA 16148.

Plant a tree in memory
of Andrew

A place to share condolences and memories.
The guestbook expires on April 14, 2020.